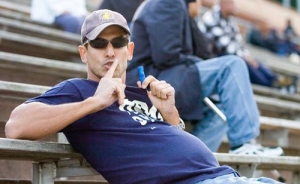 “Middle Age is where your broad mind and your narrow waist begin to change places.” – John Crossman

I never really took a regular medication for a condition before I was in my forties. My mother did not believe in pills. She was one part Christian Scientist and two parts Inuit Darwinist subscribing to the notion that sick children, like old people, should be just set outside the igloo at night and if they were still alive in the morning, they were allowed to rejoin the family. Illness and chronic conditions were things that plagued other people, like old man Norton who lived across the street. At 85, he suffered from heart failure and diabetes and it seemed like every other week they were lopping off one of his appendages as a sort of burnt offering to his disease. It was a preview of a movie I hoped to never see.

As a kid, you averted your eyes from the vagaries of aging, not so much out of denial but out of some misguided sense that old age only happened to other people. Deep down, you knew it would be waiting for you, like that German Shepherd that sometimes chased you on your bike.  On sunny afternoons, I occasionally glimpsed Mr. Norton and he would wave to me from his wheel chair – all two arms, one foot and a half leg. It freaked me out and I made a pact that I would never succumb to old age. I would cheat it and commit to a life either so reckless or physically vigorous that chronic disease would simply shrug and pass me by. I would go out in a flash, perhaps spontaneously combusting on a rock and roll stage or slowly asphyxiating on the side of Mount Everest after rescuing a dozen Sherpas trapped inside a crevasse on the Khombu Icefall.

Despite my best efforts to remain a juvenile, middle age finally collared me. I am now bemused by my own denial – a self deception that seeps in like lugubrious fog obscuring moments of self reflection. I prefer to see myself in a certain light and favor friendships with people who conserve electricity — their “energy-saver” bulbs have a sort of muted Blanche Dubois quality that fails to expose my true age. I prefer pleats, spandex, “comfortable” levis, and larger versions of everything. I wear my shirt outside my pants and tend to avoid stripes which turn me into a large Faberge egg. My wedding day 33” inch waist has eroded like a Florida sinkhole, widening to 38”, a metric that is really only meant to define the circumference of old trees and an athlete’s vertical leap at a football combine. A protective shell has formed near the top of my solar plexus. It feels like a muscle but I am being told it is fat — presumably being stored in the event the Food Emporium ever goes on strike.

Global warming has begun. The canard that only women get hot flashes could not be less accurate. When you are large and in charge, you feel warm all the time. In a single winter day, you are both sweating and freezing as you go from windy, frigid streets to offices hotter than an Indian sweat lodge. In summer, you advocate the notion that thermometers should be calibrated by weight not by temperature as you would prefer to set the air conditioner to a cool 235 pounds each night instead of the balmy 105, favored by your wife who has not gained a pound across three children, two continents and a quarter century.

You start driving a nice sports car because it reminds you of a time when you could sit comfortably in the middle seat of an airplane and not feel like a human smore. People start to whisper when they see your new ride, “Tsk, tsk. He’s having a middle-aged crisis”. Well, folks, I’m here to tell you that in 1986 when I did look good enough to actually drive my own convertible, I did not have two dimes to rub together and drove a puke green Renault Alliance that not unlike the French, would routinely sit down in the middle of a job and go on strike. We sports car drivers are not compensating for anything. We’re just enjoying the fruits of our hard labor and perhaps hoping not to be as invisible as we feel.

At 53, the body starts paying you back. The knees went first. Years of sports and running coupled with a pathetic version of stretching that involved making one effort to briefly touch my toes, gave me a bulging disc and hamstrings as tight as a cat-gut mandolin. The shoulders followed. Years in the weight room with poor technique, a mediocre baseball career as well as annual trips to the emergency room after countless injuries in Turkey Bowl football games, rewarded me with clicking joints reminiscent of a playing card hitting the spokes of a bicycle tire.

The latest manifestation of mortal decline occurred at Halloween while sucking on one of the many Tootsie Pops that I appropriated from my youngest son informing him that he must pay “a toll to the troll’.   He might as well get used to being taxed now. As I succumbed to the inevitable urge to bite the hard candy, my right molar broke off like the Antarctic Ice Shelf. It would turn out to be an $1100 piece of candy and the birth place of my first crown. Thinking back, I’m sure old man Norton had his fair share of crowns but I had always assumed my teeth would be indestructible – at least I thought so in college when we opened beer bottles with them.

Middle Age now means moderation – another profane word. The whole diet thing is a touchy subject in any marriage where there is a weight imbalance. Yet, she tolerates me and often travels great verbal distances to find just the right word for self improvement. I listen in amusement wondering how my spouse might segue from ISIS to my losing ten pounds. It’s diplomatic genius. She ought to work in the UN. She uses code words to hint at lack of restraint – patronizing placeholders like “ healthy”, “balanced” and my favorite “portion control”.

Gratefully, the dog does not seem perturbed by my slow disintegration. He moves at my speed – an adoring shadow that has fallen in love with my insides and considers my outsides, merely a coat of extra fur. The dog and I agree on the true definition of “portion control”: eat until you are going to be sick. Normally, when he overeats, he goes outside, munches on some grass, returns and throws it all up on a nice rug. I just lie down and moan, informing my wife that I think I have the stomach flu. Meanwhile my son comes in the room to incredulously ask, “who ate all the cupcakes?” I try to blame the dog but he is in the other room throwing up grass.

I am suddenly noticing now that everything in the fridge is “low fat”. I search for sweets at midnight and the cupboards are filled with healthy things like nuts, dates and dried apricots. This is no longer my house, it’s a spice market in Baghdad. I search her favorite hiding places including the most clever default– the microwave. I am mildly insulted at our passive aggressive war of weight and wits – but hey, game on. She is Holmes and I am her arch enemy Professor More For Me. The dinners are very healthy with portions smaller than a French restaurant. Like Oliver Twist, I keep waiting for seconds but she has cleverly prepared only enough for one serving. “More? You want…more?!”

It’s not like I don’t try. The problem is the majority of calories I consume occur between 7PM and midnight. Night eating is a problem. It hits every man — the day arrives where you go to bed on a full stomach and wake up coughing with the sensation of napalm in your throat. My first thought was I was turning into a dragon and that perhaps I just needed to light a match to give birth to the fire in my esophagus. The next thing I know I am exchanging proton pump inhibitors like Zantac and Nexium with another middle aged stranger in a late night diner like a couple of crack heads.

Family photos also become an issue. It’s always subtle – one of your kids or your wife will say, “Here’s a good one of you, Dad!” with profound encouragement. This is code for you look like the Hindenburg or a human manatee in most of these shots but this photo (where we can’t see your face), may meet your denial criteria. I now find myself fighting over Christmas photos more than the kids. “Jesus, if you are going to use that one, at least tell everyone my due date.” “Oh great, we don’t need to tell them where this was taken because from this angle, I look like Asia Minor.” In the end, we decide to feature only kids and I finally concede to one couples photo that will be on the inside of the card. She looks great and in this one I look young enough that at least anyone who does not know us will assume she is my second wife and not my daughter.

I can almost hear the Christmas Card comments, “Wow, she looks great!” Pause. “ And he looks…um, prosperous!” The absence of praise should be construed as criticism. Yes, 53 has become the new 38. 38’s are everywhere: 38” waists, a maximum of 38 push-ups, 38 minutes jogging before the knee feels like you have been swatted by Malaysian riot police, 38 ways to hear someone say, “I would not wear that if I were you.”

Life has turned quickly from “do’s” to “don’ts”. The new regulations: Don’t eat fatty foods. Don’t eat after 7pm. Don’t eat meat, Don’t eat fat. Don’t eat refined sugar. Don’t eat gluten. ( I’d actually like an extra helping of gluten please, waitress and can you fry it into a little fritter so I can drizzle honey on it?”

It’s a losing battle in a three front war – with those who conspire to fix me, with my own lack of restraint and with Father Time. Winter is coming and the stakes are increasing.

Did someone say, “steaks”?

Sullen, dreary, dark shadow afternoons. Cold front door mornings that slap like a locker room towel and the endless layers of clothes thick enough to hide a rocket launcher. Comfort foods abound and whisper – hearty soups, breads, pastas, cookies — a universe of simple and complex carbohydrates designed to raise your blood sugar and your mood. It is a never ending battle between good and non fat.

At 53, my superhero outfit is a little tight. I think I popped a button off my lederhosen but its my job to be a “roll” model for other middle aged manatees. You want us on that wall. You need us on that wall. We just all can’t climb up on it at the same time or it might break. We have our purpose. We make the skinny people feel good and aren’t afraid to be the “before” picture in some ad touting self improvement. But inside our 38’s, we’re 33’s busting to get out. We need a little more restraint, a little more sunshine, a vanity based event like a wedding, reunion or family vacation where posing for a photo or removing one’s shirt is a requirement to keep us on the straight and calorie free path. It’s not too late. You may be middle aged but inside your fifty-three is a thirty-eight and underneath that it is a thirty-three. You know, sort of like a burrito. Yeah, that’s it.