The grandfather clock chimed twelve am. The house was a silent sea of deep, rhythmic breathing, interrupted only by the sudden movements of an energized Australian Shepherd who was fixated on my every move.   I sat exhausted among holiday detritus — screw drivers, instructions, unassigned nuts and bolts and scores of AA batteries.  I was once again feeling sorry for myself and resenting the imminent holiday and its fatigue. Another Christmas.

I had predictably caved to commercialism spending well beyond my budget, stimulated by that seductive liar 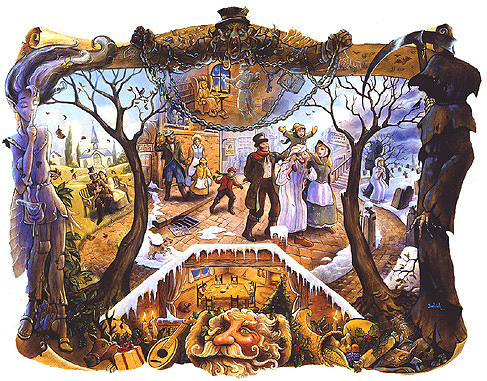 — nostalgia.  I had gained five pounds at social and business gatherings and in a fit of self pity, wished that I could be transported back in time when I was the child upstairs sleeping.  As if sensing my sullen mood, the dog rested his head on my knee. Suddenly, he perked his ears and darted behind the couch – – his emergency shelter any time that something is not right in the house.

“Get back in your beds! “ I hissed into the dark hallway.

Expecting to hear giggles and scampering feet, I instead heard what sounded like chains and cleaning equipment being dragged across our wooden floors.  I raised my voice as I darted around the corner trying to catch the young spies in the act, “What are you doing down…?”

I startled, dumfounded at the odd specter hovering in front of me.  A phantasm, clothed in mid-nineteenth century finery, swirled near the staircase.  Ghostly baroque Christmas carols floated up from under his topcoat. “I am the ghost of Christmas Past, Present and Future.  I have come to confer with you so that I might save you from a future that I was not able to escape”.

“I think you have the wrong house, Bub.   Charlie was the investment banker.  He lives next door.”  The ghost hesitated, looking flustered and the music stopped.  He materialized a little more clearly and descended to the floor.  He reached a modest height of five feet but looked up at me through spectacles and a silver hedge row of furrowed brows.

“I knew they gave me the wrong address.  No, wait, wait, wait. This is right.  You are in the health care industry.  Oh yes, this is the house.  We have launched Project Merry Gentlemen this year.  Last year, we haunted Congressional officials under Project Windsock. It did not do much good. Although several did not heed our warnings and were not reelected this year.  This year, we have big business in our crosshairs. It was either come here or go march with the We Can’t Breathe crowd. Lot’s of causes but not many marchers in this neighborhood.

“We want to make sure you remember the role you free market capitalists are supposed to play in society.  Some of you muckety mucks need to remember there is a God and you are not her!”

“It’s a long story”, the ghost sighed. “It says here you are a managed care consultant.  I am not sure what that means but it sounds like an oxymoron.” I started to look defensive and he quickly changed the subject.  “Look I got a lot of other business people to speak with tonight. I am initially visiting the ones that own only one house.  They are easier to locate.”

I was puzzled, “uh, where exactly are we going and where are the other ghosts – you know, the ghosts of Christmas Present and Future?”.  The ghost exhaled,

The ghost looked disgusted. “They all got laid off or demoted to other departments within Purgatory.  About a year ago, Purgatory got overrun by a bunch of private equity guys.  They started telling us we were the lowest margin department in the spiritual world and we needed to cut costs and reduce headcount.  I now have three times the amount of hauntings as I used to have and I have had my goodwill pay frozen for one hundred years.  The ghost of Christmas Past was made “redundant”.  She’s now haunting houses part-time.  Christmas Future has been redirected into Children’s Nightmares.  He just got put on probation for causing the entire state of Nebraska to wet their bed.  With the hood and skeleton hands, he’s a tad over qualified for bad dreams.”

“I thought Purgatory was the place between heaven and hell.” I asked, confused.

The ghost nodded his head. “A common misconception. We exist in a place that is sort of like – – Heaven’s mailroom.  If we do well, we get promoted upstairs or if we are really lucky, we reincarnated back to earth as dogs.”

I leaned close and asked the millennium old question, “What about Hell.  Is it, you know, real?” The ghost looked thoughtful and leaned in to whisper in my ear, “Hell is being a Jets fan.” He laughed and impend the front door with the wave of his hand.

“Let’s go visit your past and present and see if we can’t leave you with a little perspective at this important time of year.”  A rush of frigid air swirled around us as we were caught up in a sort of funnel, spiraling up and then just as suddenly, alighting on a manicured lawn.  Magnolia trees lined suburban sidewalks illuminated by street lamps.  I saw a young pre-teen riding a ten speed bicycle by himself while a physician got back into his Ford after making a house call.  I knew in an instant that we had fallen backward in the early 1970’s  We floated in the air, hidden by the shadows of weak light cast from a few the massive living room bay window of a Spanish style home.

“What is all that noise inside?” the ghost asked as he craned his head, pressing his nose to the single pane glass.

“That”, I said, “is most likely my father, swearing as he puts up the Christmas tree.”  I peered inside to spy four young boys running in and out of a room packed with presents while an Andy Williams Christmas song played  on the hi-fi.  The ghost mused, “It’s quite comfortable outside, why is there such a large fire in the fireplace? “

I suddenly felt a hot flash. “My Dad liked fires and fireplaces.  He grew up in Chicago where they were both a necessity and a sentimental symbol of domestic bliss.  It was always like an Indian sweat lodge when Dad cranked up the old Yule log. My Mom would go into the other room complaining that it was night time yet for her to have man-o-pause.  I didn’t understand what Man-o-pause was but assumed it had something to do with the fact that we had a house full of men.”

We watched as a mongrel dog trotted up to the tree and lifted his leg to urinate while my father’s jaw dropped in stupefied horror. As he moved to kick the dog, the tree fell over.

“I loved Max,” I said absentmindedly. “He was the perfect dog for four boys.  A few years later, he finally attacked something that was tougher than he was”

“And that was,“ asked the ghost.

“A moving van” I sighed…

We moved along a continuum of time as we walked invisibly among family parties, card games, laughter, endless baking, candle light church services, caroling, friends, gifts, and a rather embarrassing rearrangement of nativity figurines that resembled a swinger’s party.   The moments melted into a montage of family life all sweetened by our time together.  With each successive Christmas, our Southern California home seemed brighter, warmer and more festive – – the spirit of the season casting a light across every face. And somewhere in the distance, Andy Williams was always singing about it being the most wonderful time of the year.

“You see,” the ghost chastened me.” You really did have a wonderful life.”

I shot him a cynical glance.  “Look Clarence, or whatever your name is… I’m not George Bailey trying to jump off a bridge.  You just caught me wishing I could be a kid again – you know, for a few hours.” The ghost looked sympathetic but then became stern.

“My time is short.  I am supposed to haunt at least ten more suits tonight. We have not even gotten to your gradual enslavement to work and your preoccupation with reality television. ” He looked me in the eye.  “I just want to remind you that Christmas is a holiday that celebrates the birth of the Christian messiah.  His life was all about serving others.  This season is about your fellow man – -those you know and those you have never met.  You know, ‘God Rest You Merry Gentlemen’ and all of that?   Since you ruined your chances for public office in college, you can still inspire people by serving others and through your actions, remind them during this season that Christmas is a state of mind.  Empathy and compassion are the chief ingredients to human kindness.  It’s that warm nostalgic feeling that makes you want to buy gifts, light fires and curl up to watch reruns of Cary Grant and Loretta Young in The Bishop’s Wife.”

His face got stern, “You business types want free markets, limited regulation, small government and flat screen TVs.  Ok, but that means you have to be responsible social stewards and help actively stitch together a social safety net to take care of those who are less fortunate.  It’s in your spiritual job description if you’d ever bother to read it. You may feel more vulnerable in today’s economy but 95% of the world is financially worse off than you.  I am not sure how you find time to get on your pity pot with so much going for you.  By the way, if you do not choose to help those in need, there are those who would love to force you to do it.  As they say at the office, I’d rather be the guy who writes the memo, than the one who has to read it.”

The ghost smiled and faded into a gossamer mist, finally disappearing. I woke up in my favorite chair with my back aching as it always does when I watch back to back episodes of Cops.  I suddenly realized that the holiday season was really about those sitting around the tree, rather than what rested underneath it.

I walked through the house, turning out lights and hesitated for a moment, watching the Christmas tree and the glowing palette of ornaments reflecting the soft kaleidoscope of color.  I heard the CD changer in the other room click and suddenly heard a familiar symphony of brass as Andy Williams started to croon, “It’s The Most Wonderful Time of The Year.”